“In the late 19th Century, improvements in transportation made it more practical to develop the hillsides. It was at this time that the city of Clifton, a hillside suburb of Newport, was developed. Clifton was incorporated in 1888 by developers who chose the site due to its proximity to Newport, the spectacular views of Newport and Cincinnati afforded from the hillside, and its natural setting” (“St. Vincent de Paul School, CP-N-260,” National Register of Historic Places nomination, 1989).

For the first Century or so of its existence, the city of Newport was confined by natural boundaries — rivers to the north and west, Taylor Creek to the east, and steep hills to the south. Its manmade boundaries “extended just past 12th Street to the south and only to Oak to the east, so by 1900 the city was fast approaching the natural limits to its growth” (Thomas L. Purvis, ed., Newport, Kentucky: A Bicentennial History. Newport, KY: Otto Zimmerman & Son Co., 1996, p. 177). 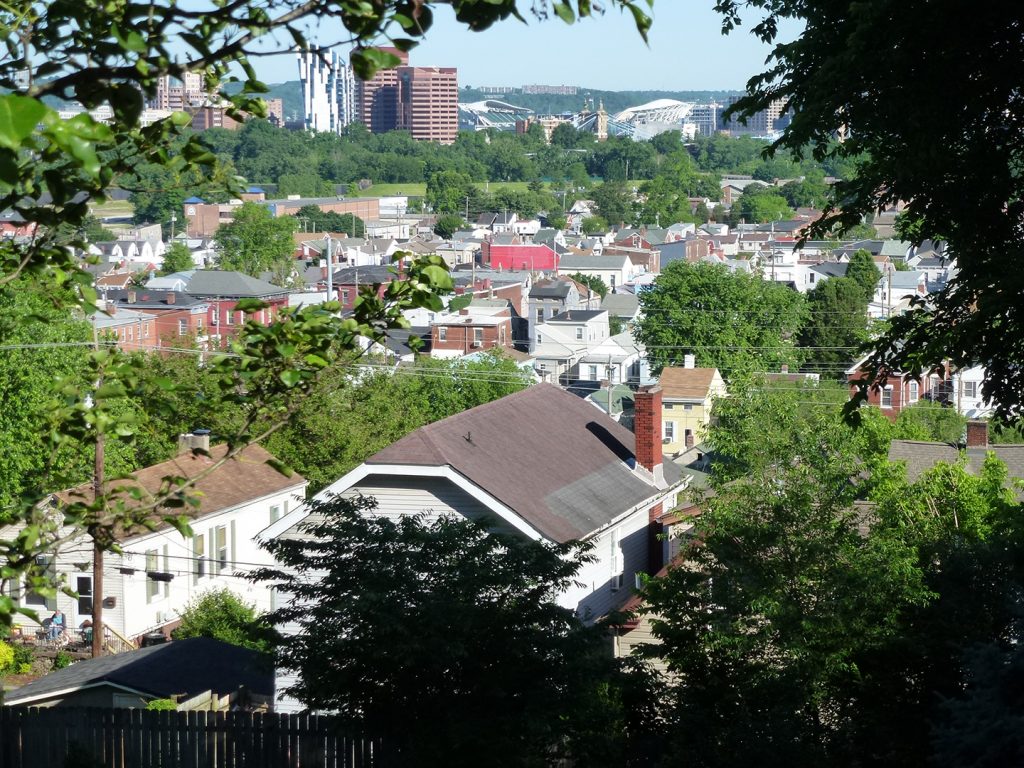 Overview of the Clifton neighborhood of Newport, Kentucky, showing its spectacular views of downtown Cincinnati. (Photo by Margo Warminski, 2020.)

By the early 20th century, the city found itself surrounded by growing suburbs. “Increasing automobile ownership, mass transit, and highway improvements encouraged the growth of suburbs on the periphery of Newport. Clifton occupied ‘South Newport proper,’ that is, the terrain south of the railroad tracks and west of Alexandria Pike; its organization into residential lots began in the 1880s, and its first town meeting took place in 1888” (“St. Vincent de Paul School, CP-N-260,” National Register of Historic Places nomination, 1989).

In 1906, Newport first announced its intention to annex Clifton, the largest of its suburbs in population and land area. However, the city backed off when faced with solid opposition from Clifton’s citizens. Six years later, Newport again launched a major annexation offensive, forcing voters in Clifton, Cote Brilliante, Bellevue, Dayton, and the unincorporated Highlands District (later renamed Fort Thomas) to hold elections on whether to consolidate with Newport.

Every community chose to stay independent despite the genuine advantages offered by annexation: street improvements, extended utilities, and expanded services such as police and fire protection. “Bellevue, Dayton, and Ft. Thomas opposed amalgamation so overwhelmingly that Newport gave up trying to acquire them” (Purvis, p. 177).

Still, “Clifton remained the great prize. The stubborn people of ‘The Hill’…valued their independence and had cultivated a tight-knit sense of community pride during their short history” (Purvis, p. 178). Not surprisingly, “The issue sparked intense controversy on The Hill. Citizens penned opposing articles for publication in the press. Even school children received assignments to write papers on whether Clifton should become part of Newport” (Purvis, p. 178). The opposition of residents notwithstanding, for the next 30 years Newport would periodically attempt to annex its hilltop neighbor. 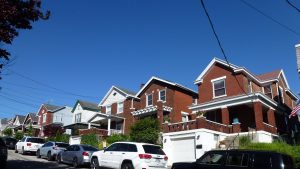 West 15th Street in the Clifton neighborhood of Newport features well-built two-story homes such as these. (Photo by Margo Warminski, 2020.)

In 1935, during the midst of the Great Depression, Clifton residents voted to be annexed to Newport. The change of heart came about partly because Clifton “had jeopardized its tax base with a heavy bonded indebtedness to finance civic improvements” (Purvis, p. 178). Moreover, the Great Depression had left Clifton’s citizens and government strapped for funds, and the prospect of financial relief from a Newport takeover proved irresistible, “especially once rumors spread about a year’s moratorium on property taxes if annexation passed” (Purvis, p. 178). By the way, the tax holiday failed to materialize.

Newport gained about 3,000 new residents from the annexation, most of whom worked either at the Andrews steel mills or commuted to Cincinnati. “The neighborhood housed a brick manufacturer, a cigar maker, seven building contractors, seven small groceries, and a Kroger’s supermarket” (Purvis, p. 179). As part of the annexation agreement, Newport established a professional fire company in the former Clifton administration building to serve the neighborhood, replacing the former Clifton volunteer department. The historic firehouse, referred to by the fire department as “South Newport,” is still in use today. (“Newport Fire/EMS History”)

Newport benefited from a new wave of immigration at the turn of the 20th century, which brought Italian Catholics as well as Orthodox Jews from Russia and Poland. While every Newport ward contained Italian families, “the greatest concentration lived in Clifton. Folk tradition explains this fact as resulting from so many of the earliest immigrants having been recruited to cut limestone from a quarry bounded by Amelia, Ash, Main, and Home Streets” (Purvis, p. 180). 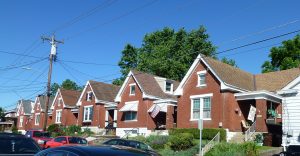 An annual Italian festival earned Clifton the nicknames of “Spaghetti Knob” or “Spaghetti Hill,” although “Sauerkraut Hill” might have been more appropriate, as most persons living there actually were of German descent. Indeed, the “Italian community’s actual size was rather modest. It accounted for just 4.1% of Newport’s foreign-born residents in 1930, and probably amounted to 2% of the city’s overall population” (Purvis, p. 182). The festival tradition continues today, relocated to the Newport riverfront. Clifton nurtured generations of politicians and civic leaders, many of Italian descent, including the Peluso and Guidugli families and the late Irene Deaton, Newport’s first and, so far, only female mayor.

By the late 1980s, Newport’s Mansion Hill and Gateway neighborhoods — newly designed as historic districts — had caught historic preservation fever, and soon Clifton followed. In 1989, the long-vacant and deteriorating St. Vincent de Paul School building was purchased by a developer, listed in the National Register of Historic Places and renovated as apartments, restoring a link to the neighborhood’s past. Today, Clifton’s traditions, family ties and panoramic city views continue to attract people to build or renovate homes on the “Hill.” 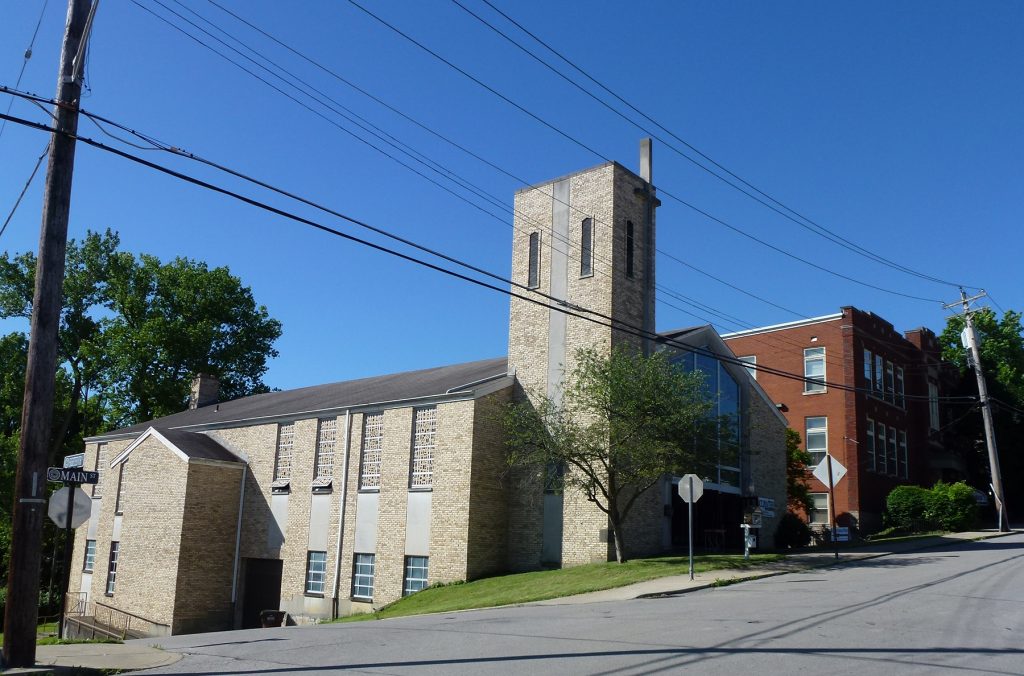 St. Vincent de Paul Catholic Church was one of the centerpieces of the Clifton neighborhood of Newport. Established as a parish in 1916, the church building pictured here (designed by the architectural firm of Betz and Bankemper) was dedicated in 1960. In 1997, the parish merged with the remaining three Catholic parishes of Newport, and two years later, the St. Vincent de Paul location closed. (Photo by Margo Warminski, 2020.)