Newport is the oldest of Northern Kentucky’s river cities, with a rich history of buildings, their owners, their designers and their occupants. For too long, this legacy was neglected, if not scorned, by investors who wanted to make a quick profit from these treasures, or simply demolish them. Beginning in the 1970s, this began to change. And ever since, new generations have grown to appreciate this gift from the past. 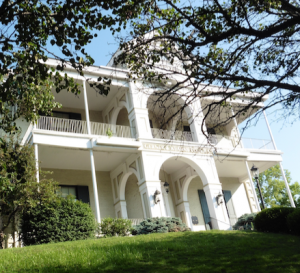 The Taylor Mansion, the home of Newport founder, James Taylor V. Instead of demolishing the family estate in the 1880s, the Taylor heirs chose to remodel the house by removing one wing, adding another, and reorienting the house to Third Street with the addition of a two-tier veranda, as seen here. (Photo by Margo Warminski.)

The Greek Revival was the first “National” style of the new American republic. Greek mania swept through the country in the early 19th century following archaeological discoveries in Greece and the Greek war for independence. Buildings of every type displayed a temple front and columns, as well as a pediment and entablature. Other characteristics of the style include generally symmetrical facades, a heavy entablature and cornice, and a rectangular transom and narrow sidelights framing the front door.

Few Greek Revival buildings in Newport have survived to the present day. Undoubtedly the grandest and most celebrated is “Belle Vue” on East Third Street in Mansion Hill, home of Newport founder General James Taylor and centerpiece of his thousand-acre estate. The mansion is believed to have been built circa 1820. “While no blueprints exist, the home has been attributed to Benjamin Latrobe and is referenced in Patrick Snadon’s book,  The Domestic Architecture of Benjamin Latrobe” (Russ Thomas, “Our Rich History: Belle Vue, the beautiful hilltop mansion of James Taylor V, still inspires today,” Nov. 11, 2019, NKYTribune.com). 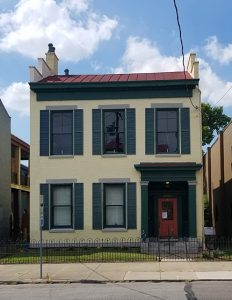 Following the general’s death, the house eventually passed to his grandson, Colonel John Taylor. The Colonel, along with his wife, Betty, saved the mansion from demolition by transforming it from a country estate to a valuable townhome that is still treasured by Newport residents today.

An example of the Greek Revival on a more modest scale is located at 17 East Sixth Street in downtown Newport. Historically part of the city’s “Physicians’ Row,” the building presently houses the office of Mark Schroer, M.D. The well-preserved brick side-passage building retains stepped parapets and historic wood and leaded-glass windows. The shouldered architrave at the front entrance is a reproduction of the original. A sign in front of the building celebrates its history.

The Italianate style was the dominant architectural style of Victorian-era Newport, including the neighborhoods of East Row, Taylor’s Landing and Buena Vista. 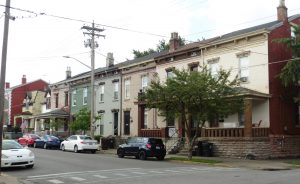 This six-unit Italianate rowhouse at 900-912 Columbia Street is one of three in the city. (Photo by Margo Warminski)

“The Italianate style was the dominant architectural style in urban America from the 1860s to the early 1890s…. [It was] a derivative of the formal Italian Renaissance townhouses of the 15th and 16th centuries. The narrow lots of Newport were well suited for this style which featured extensive decoration on the main facades. Most buildings constructed in the East Row Addition were two-story masonry residences with a number of smaller one-story residences scattered throughout. Common features included stone quoins, belt courses of stone or brick which divided each floor, and elaborate metal, stone, or wood cornices at the roofline. Windows and doors were also embellished with stone, wood or metal hood moldings in rectangular or rounded arch sash variations” (“East Row Historic District Design Review Guidelines” [n.d.], p. 2).

Illustrating the variety of this prolific style, the Italianate buildings of the 300 block of Hodge Street in Buena Vista represent no fewer than four different house plans, as follows:

Several blocks away in Buena Vista is a six-unit Italianate rowhouse at 900-912 Columbia Street, one of three in the city. Built circa 1880, the two-and-a-half-story units feature two-bay facades with keystoned window hoods, narrow corbeled string courses, and lightly bracketed cornices with frieze windows. The central units exhibit floor-to-ceiling windows at the first story. Bungalow-style brick porches have been added to three of the houses, some of which are undergoing rehabilitation. 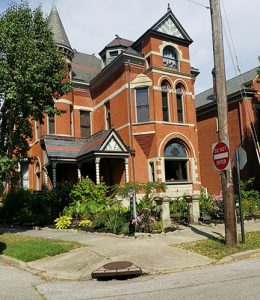 Anchoring the corner of Third and Overton Streets is an exceptional Queen Anne residence, built circa 1889 for boiler manufacturer Thomas McIlvain, partner in the McIlvain & Spiegel Boiler & Tank Company in Cincinnati. (Photo by Margo Warminski)

“The Queen Anne style was the dominant urban building style of the 1890s and early 1900s. It was derived from English Medieval building forms and gained popularity through pattern books and the availability of cheap sawn lumber used for architectural ornamentation…. The Queen Anne style was built throughout the area in the 1890s and is especially predominant along the 300 block of Overton Street, East Third Street, East Fourth Street and Lexington and Park avenues…. Some homes from this period also display the influence of the Second Empire style which featured mansard roofs of slate laid in decorative patterns on the main façade.

Anchoring the corner of Third and Overton Streets is an exceptional Queen Anne residence, built circa 1889 for boiler manufacturer Thomas McIlvain, partner in the McIlvain & Spiegel Boiler & Tank Company in Cincinnati. After years of neglect by a former owner, it has been lovingly restored by the present owner, earning a well-deserved award from Preservation Kentucky. The owner’s diligence included tracking down and reinstalling four exquisite stained glass windows sold by the former owner. 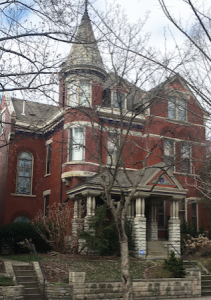 Built for the founder of the Cincinnati area’s largest music store, the turreted Charles Willis Mansion at 529 East Fourth Street in Mansion Hill is the grandest residence in a block of splendid homes. (Photo by Paul A. Tenkotte)

Built for the founder of the Cincinnati area’s largest music store, the turreted Charles Willis Mansion at 529 East Fourth Street in Mansion Hill is the grandest residence in a block of splendid homes. Like many large houses in the neighborhood, it later sank into deterioration. It recently has been renovated and restored.

A particularly well-preserved example of the closely related Dutch Colonial Revival style can be seen at 740 Linden Avenue. The first story is built of hollow-core concrete block, and the upper is clad in painted wood shingles. An intersecting-gambrel roof, covered with gray slate, extends over the full-width front porch. 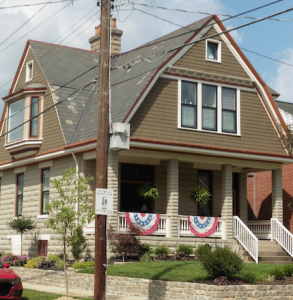 The Colonial Revival style also appears in several houses in Cote Brilliante built in the early twentieth century, including East Tenth Street, Vine Street and Park Avenue. “This style is typified by a formality and symmetry of massing, and may incorporate a Palladian window in the pediment of [sic] gable ends” (David L. Taylor, “Cote Brilliante Historic District,” National Register of Historic Places Nomination, 2004)

One of Newport’s most popular house types of the early 20th century was the American Foursquare. Generally built of brick with front-gabled or hipped roofs, these houses feature regular, symmetrical plans, broad front porches and Craftsman-inspired detailing. Numerous examples, built circa 1910-1920, can be found at the east end of Newport, particularly along Maple and Linden Avenues. In Cote Brilliante, a particularly strong concentration can be seen on the 700 block of East Tenth Street. Exhibiting such details as front-gabled roofs, full-width brick, block or frame porches, and “cottage” windows with stained-glass transoms, these residences appear to be the work of the same, still-unidentified builder. 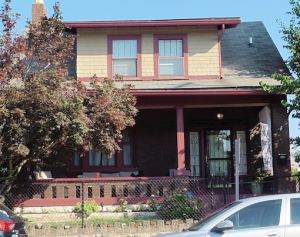 519 Monroe Street is a well-preserved brick and frame Craftsman bungalow with a Japanese influence, standing 1.5 stories high under a side-gabled roof. Photo by Margo Warminski.

“The Bungalow or Craftsman style was the dominant residential building form in America in the 1910s and 1920s. This style was based loosely on the open Bungalow house forms of India and was modified and popularized in California in the early 1900s…. In areas developed after 1910, such as Linden Avenue and Oak Street, Bungalow and Craftsman designs predominate…. Most are of brick construction and are rectangular, symmetrical plan designs. Similar plan residences in this style can be seen in the 600 blocks of Maple and Linden and along East Fourth Street. Smaller examples of the Bungalow style of brick and frame are located in the 600 block of Oak Street, These residences were built after 1927 and have prominent gable or hipped dormers on the main façade…” (“East Row Historic District Design Review Guidelines,” p. 5).

The house at 519 Monroe Street is a well-preserved brick and frame Craftsman bungalow with a Japanese influence, standing 1.5 stories high under a side-gabled roof. The broad front gable is covered with alternating layers of wood shingles. A few blocks away, the dormer-front bungalow at 317 East Ninth Street retains many original features including leaded-glass sidelights and a wood-shingled shed dormer. 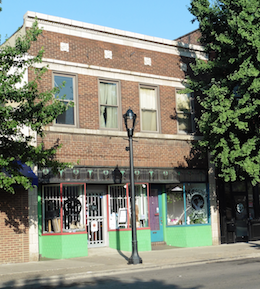 At 721 Monmouth Street is a modest, yet finely detailed, two-story commercial/residential building built in the early 20th century. (Photo by Margo Warminski.)

While single-family homes are the major focus of many historic architecture enthusiasts, Newport’s numerous stylish, well-preserved apartment buildings should not be overlooked.

Both of Newport’s main commercial streets — Monmouth and York — are historic districts with significant collections of commercial architecture. At 721 Monmouth Street is a modest, yet finely detailed, two-story commercial/residential building built in the early 20th century. It is clad in running-bond brown brick articulated by continuous sills, lintels, belt courses and plaques of mottled terra cotta. The angled, double storefronts feature a continuous stained-glass transom with accents of stained and beveled glass and bulkheads whose tile is now covered with green paint. 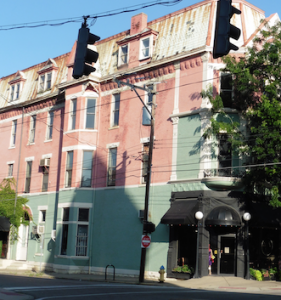 At 738 York Street is a former drugstore and lodge hall transformed into a destination restaurant and event space. (Photo by Margo Warminski.)

Around the corner, 738 York Street is a former drugstore and lodge hall transformed into a destination restaurant and event space. The three-and-a-half-story, Second Empire-style brick structure with Victorian Gothic accents addresses the intersection of Eighth and York streets at an angle. Its richly ornamented, yet somewhat neglected façade incorporates fluted pilasters, corbeled brickwork and an imbricated slate roof.

We hope this overview of Newport’s architectural legacy encourages you to discover it for yourself. And don’t forget to bring a camera.

Theme by Anders Noren — Up ↑